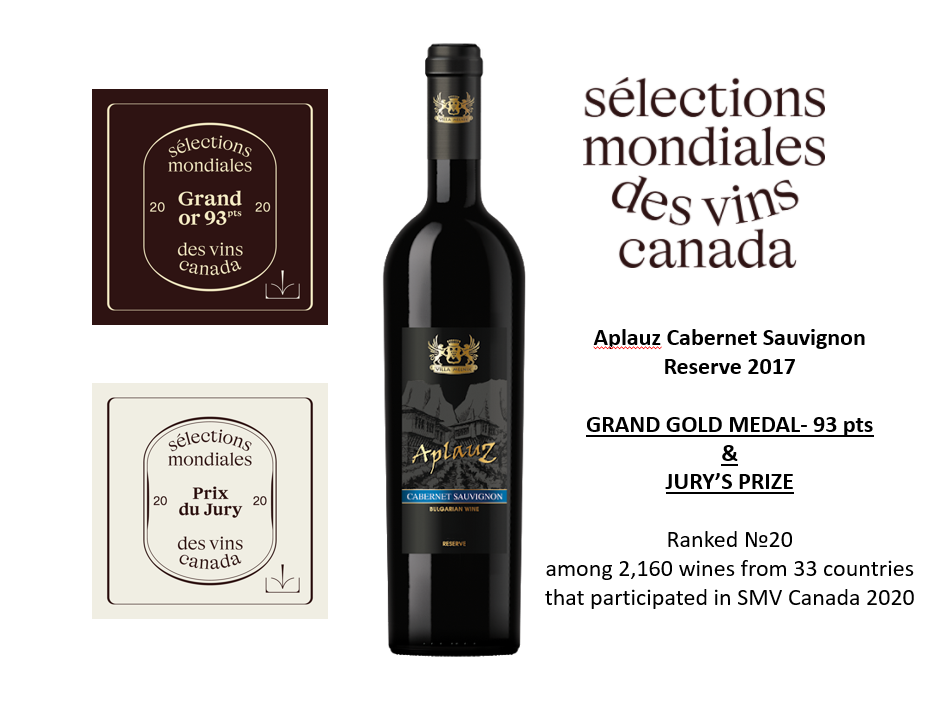 We are proud to announce that Aplauz Cabernet Sauvignon Reserve 2017 won the Grand Gold Medal and the Jury’s Award from North America’s biggest and most prestigious compettion, SMV Canada. With 93 points, our wine ranks at №20 in the Top 50 awarded wines.

We are taking the liberty to share with you the text from the newsletter that SMV emailed all of its subscribers:

Bulgarian wine has a long history and an ancient wine-making tradition. However, it is only in the 90s – after the fall of the communist regime – that the industry became 100% private, becoming today one of the most competitive and important sectors in its economy. Bulgaria’s wine industry has five regions from north to south, more than 25 indigenous varieties, around ten international grape varieties, and a world-famous protected geographical appellation, the Thracian Valley.

Besides contributing to the continued development of rural areas, maintaining and encouraging the efficient use of natural resources, the wine sector in Bulgaria preserves the diversity and traditions of the regions and enhances the country’s image abroad. About 80% of the total production is exported abroad and its main destinations are the United Kingdom, the United States, Norway, the Netherlands, Japan, and Canada.

Nowadays, Bulgarian wine is a balanced combination of tradition and cutting-edge technology, contributing to its reputation of being a country that produces high-quality wines, with an impressive number of awards in various wine competitions all over the world. Here is proof: at Sélections Mondiales des Vins Canada 2020, Bulgaria is one of the countries with a wine that is part of the Top 50 best scores list!